“Who’s bad?” in the British political scene of 2012 it has to be Boris Johnson. The publicity-loving Mayor has been showing his dangerous neo-liberal tendencies again; this time by using his column in the Telegraph to support of the pursuit of shale gas, better known as Fracking.

This article was lazy even by his slap dash standards, throughout he manages to ignore any empirical evidence about fracking and uses what I would describe as cold war style rhetoric to make his points. This little snippet used when talking about the Kyoto treaty stopping us building new coal stations sums the language used throughout the article perfectly: “We are therefore increasingly and humiliatingly dependent on Vladimir Putin’s gas or on the atomic power of the French state”.

We all know Boris isn’t one to follow rules, however it would appear this extends to following scientific reports. Although Boris did correctly identify that gas omits less CO2 than burning coal. Well-done Boris. Although studies commissioned by the EC have found Shale gas is likely to have higher emission levels than conventional gas extraction methods. So not much, much, cleaner Boris but still probably the second most destructive form of fossil fuel consumption available to us at the moment in Europe.

Boris also claims there hasn’t been one single complaint the Environmental Protection Agency in the US where fracking has been widespread. Sadly it appears Boris hasn’t heard of the infamous ‘Hallburton Loophole’. In 2005 Congress passed the Energy Policy Act. This act included a clause which exempted nearly everything used in fracking from being regulated by the U.S. Environmental Protection Agency. So if you live in the United States and your drinking water now has shale gas mixed in with it because of leaking fracking wells, you can’t complain. If the fracking rigs cause poisonous air quality, you can’t complain about that either. Instead artists led by Sean Lennon and Yoko Ono have united against fracking to stop it happening in the New York area.

This kind of de-regulation and reckless pursuit of fossil fuels to benefit the already rich fossil fuel industry is ludicrous. Boris should really be careful as he is already responsible for over 4000 early deaths in London due to poor air quality. So yes Boris, I am a green campaigner and I take the further poisoning of our air, water and increased carbon emission’s very seriously.  And my next point is where I find him incredibly frustrating; whenever I see him on TV he endlessly talks about the need for investment. Renewable energy is an area where we have the expertise and the opportunity to be word leaders however Boris continues to call for investment in dangerous fossil fuel technology.

And I am not alone in calling for this urgent investment in green growth the CBI (The UK’s top business lobbying organisation) recently released figures showing that one third of British growth last year came from the green economy. The figures are stacking up in favour of investment in the ‘green ecomony’. The CBI believes if we get the right level of investment from the government and investors the ‘green economy’ could deliver £20 billion in 2014/2015. I certainly wouldn’t call that ‘chicken feed’.

Again in regards to employment he really misses the point. In sectors such as wind power and energy efficiency close to one million people are already employed in the UK. Expertise in energy efficency and renewable technologies are things we can export. We can’t sell the toxic carbon emissions created by fracking that is for sure.

Boris Johnson is now widely viewed to be the future leader of the Conservative party. Members of his party would do well to remember the bumbling backbencher that couldn’t punch his way out of a political paper bag. Essentially Boris hasn’t changed he still spouts the pro business, anti environment, de-regulation nonsense, which led to the financial crisis. His ideology of neo-liberalism has been discredited; it’s heroes, Thatcher, Bush, Cheney, Blair, are widely derided figures. This article reaffirmed Boris desire to destroy our countryside and ignore the climate change crisis in the favour of short-term profits for the fossil fuel companies.

This is the man who in the wake of the Libor scandal told us “Barclays is and remains a great British brand,” a “proud” and an “historic” one no less. And he remains a champion of Rupert Murdoch despite the phone hacking scandal. The question is; do you really trust Boris on the environment? I know I don’t.

Last week it was announced that Tory led government are reducing onshore wind farm subsidies by 10%. Ed Davey the Energy Secretary reportedly lobbied hard to against the treasury who were pressing for a 25% reduction in subsidies. In the Guardian it was reported that if Mitt Romney is elected to the White House he will completely scrap all subsidies for the wind industry. 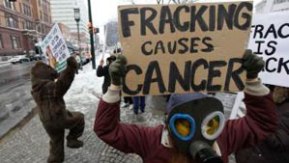 All of this hostility against renewable energy is plainly bizarre and highlights the cosy relationship between the fossil fuel industry and leading politicians.

The real question has to be; what is driving this hostility towards renewable energy sources. In the UK it wasn’t so long ago that the Conservative party were changing their logo to a tree and telling voters; “vote blue, go green”. The Treasury continues to talk of up the green economy but actions like cutting wind subsidies contradict this rhetoric. The FT reported that George Osborne in a letter to Ed Davey revealed that the government would use “renewables trading” to hit its 2020 target for carbon emissions cuts rather than generating all the green power domestically.

It was recently revealed that Osborne’s father in law ‘Lord Howell’ a former Energy Secretary under Thatcher is the president of the British Institute of Energy Economics (BIEE), which is sponsored by Shell and BP. In an article by the Independent it was also revealed that Osborne hasn’t met with a single representative from the renewable energy industry, whilst he has found time to meet with 8 representatives from the oil and gas industry. Behind Osborne’s clear scorn for environmental concerns is the Tory obsession with the un-conventential gas extraction of Shale Gas better known as ‘fracking’.

Fracking has been widely explored in parts of America leading to wide spread environmental damage and latterly partly due to Josh Fox’s film Gasland wide spread protest. Fracking has been proven to contaminate rivers and drinking water so that people can set tap water on fire. It has also been found to  cause earthquakes and will scupper any attempts to meet our carbon emission reduction targets. And the extraction of shale gas is only the start of this dangerous dash for gas, almost more worrying is the plans to burn coal bed methane.

As a member of the Green Party, I’m proud we are opposed to fracking. Back in April Caroline Lucas perfectly summed up the danger posed by fracking. Caroline said; “If carbon capture and storage technology is not in place, burning just 20% of the gas which Cuadrilla claims to have found in its licence area in Lancashire would generate 15% of UK’s total CO2 budget to 2050”.

In the summer issue of the New Statesman, Michael Brooks has written an article called: We need to talk about fracking. One of the points he makes he raises is; Do we want to be part of a generation that doesn’t even bother trying to meet carbon reduction targets? Cuadrilla the main company carrying out fracking are expecting government permission to start extraction any day now.

Personally I’m scared by the short sighted approach to our energy future the government are adopting and fracking is a dangerous carbon intensive form of energy production. So what can you do to stop fracking happening in an area near you?

I recommend getting in touch with activist group Frack Off who have been organising opposition to fracking in communities across the UK and have a comprehensive website full of facts about fracking and plans for extraction. They are really great group of people and happy to come and speak to local groups about the dangers of extreme energy extraction.

With Osborne and the government firmly in bed with the oil and gas industry; we are going to have to unite in communities across the country to oppose fossil fuel energy extraction. Creating the low carbon future we desire will be difficult and will require, local campaigns, direct action and brave politicians prepared to stand up to the fossil fuel industry. Because one thing is for sure currently this government isn’t showing any signs of doing that.